Spirituality and Science from the Beginning

I have always been able to see, feel and sense energy, as far back as I can remember. I grew up with a very pragmatic and scientific minded father and a mother who was more open to the spiritual and the unknown. The scientific and the spiritual were both fundamental to the fabric of my makeup, however they would often battle each other with resulting confusion, doubt and disbelief. My maternal grandmother was a rock for me through these times.

She was a woman way before her time. While she was a young woman in the late 1930’s studying psychology at the university she became interested in the power of the mind to affect one’s reality. The university had banned the study of hypnosis, believing it was not a serious scientific endeavor, but rather for charlatans. But this did not dissuade my grandmother. She started an underground hypnosis study group with other brave students and trailblazing professors to explore the reaches of human consciousness and its applications to our world. Later, she would move this same open sense of curiosity to the frontiers of energy, healing and perceiving beyond the five accepted senses.

Sensing the World of Energy

My grandmother was someone I could discuss what I saw, sensed and perceived without fear of judgement or ridicule. I would often go to her house with loads of questions about the things I was sensing in the world of energy: “what is this glow I see around people, animals, plants?” “why does the color and size of the ‘light’ change around people when their mood or what they are talking about changes?” “why doesn’t everyone see these things?” “Why do I feel in my body what other people are thinking or feeling?” my lists went on and on.

Training with the Masters

Finally, when I was about 12 years old my grandmother decided I could benefit from more formal mentorship and so I started studying under a Johrei Master from Japan. I later took this same hunger for inquiry and respect for elders to seek out masters and teachers from around the world to learn from- living in Central and South America and studying under shamans, as well as traveling to China for six months to study under my long-time QiGong Master, to name a couple.

I believe everyone is born with abilities that exist beyond the five senses, however, when they are at best not acknowledged by the people who hold influence over the child and at worst dismissed as fantasy or ridiculed, then like any ability they can atrophy and diminish. These experiences of validation and exploration that I was blessed to have kept that portal open for me, harnessing and making concrete the interdimensional world that we live in. The scientific and pragmatic part of my mind, while at times was at odds with these experiences, it also gave me a framework for inquiry. Like a scientist, I am always eager and curious to test, explore, understand and ask more questions.

As I got older I continued my formal studies into both worlds- the scientific and the spiritual/energetic. In college I pursued a degree in human biology- studying anatomy, physiology, biochemistry, all the typical pre-med courses. I had decided I was going to work in healthcare and I was truly fascinated by my studies. During this time I also studied under a Qi Gong Master from China, eventually going to China with him for 6 months to immerse myself in my studies of the mystical world of Qi. At the time, I couldn’t see a tangible way to marry these two worlds into a career, so I opted to move my energetic/spiritual pursuits to my private life and throw myself fully into a more socially acceptable career.

I became a biomedical research scientist in a highly regarded neurophysiology lab at a prestigious university. I gave myself completely to this work and loved every minute of it. As I gave myself over professionally and socially to the scientific world of inquiry there was less and less room for the world of Energy and Spirit. A substantial piece of me went into hiding.

Answering the Call to Serve

Eventually, my need to help people on a humanistic level won out, and when I was recruited to work clinically at Stanford on the pediatric oncology and bone-marrow transplant unit I took the job.This was no longer a laboratory of exploration, but now how I put everything I had ever studied into effect could make a real difference in a child’s life and the lives of their entire family.

On Top of the World

Life felt so full for me, so complete. Even though there was part of me yearning to be expressed, I knew I was making a real difference in people’s lives, I was doing something I was really good at, I was respected, making good money and I felt on top of the world. Over the course of these years I had married a wonderful man and we eventually started a family of our own. We had plans and dreams for the life and careers we were creating. Then all of that changed.

Then all of That Changed

My sister, Juantia, who was also my dearest and closest friend, had been diagnosed with a devastating brain tumor with a very poor prognosis. I found myself taking the journey with Juanita as sister, friend and as her medical advocate- helping her navigate the confusing world of hospitals, medical jargon and doctor after doctor, and opinion after opinion. My daughter, who was less than a year old and I were making regular trips to be with Juanita and to help her in any way I could.

My sister had always wanted to be a midwife, but now this possibility seemed out of reach as she had frequent seizures to deal with. She had been there at the birth of my daughter, helping the midwives. It was the only birth she ever attended and my daughter and sister were truly in love with each other. These times together were precious for all of us and were often the healing balm we all needed during this challenging time.

My Grandmother Leaves This World

One of our planned trips was to be extra special as our grandmother, the one who had been a mentor to me my whole life, was planning to arrive a few days after I got there. The night before her flight to San Diego her bags were packed and she was ready to go. However, she never made it. She suffered from an aortic aneurysm and died.

Before she passed I had a sudden unexplainable knowing come over me that she was going to die and that it was in fact a conscious choice from her soul to leave and be there on the other side to be there to receive my sister when she was to pass. This “knowing” was horrific to me- how could my grandmother so suddenly die- cease to physically exist? And my sister certainly was not going to die! We were doing everything possible to give her the best chances of survival. She was engaged to a remarkable, loving man. They were going to have babies and we were all going to raise our children together.

The Longest Night of the Year

Three months after my grandmother passed, my sister crossed the veil. It was winter solstice, the longest night of the year. She was surrounded by our parents, her fiance, me, my husband and daughter, her beloved dog JT and so many other loved ones. The hospice room was so full, not just of people, but of radiant light. I could see and feel so much energy from this side of the veil and the other. Saying goodbye to my sister was the hardest and most beautiful experience I have ever had in my life. It brought me to levels of pain and wonder I didn’t know were possible. I was literally seeing through the veil to the world of Spirit- the world where my sister was going to and I didn’t want the door to that world to close- ever.

My sister had been in a coma for the last 24 hours and her breathing had become increasingly irregular. It was close to 2am, we had all been at her side continuously for the last few days. I sat in a chair at the foot of her bed, one arm cradling my baby, the other holding Juanita’s leg. I was dozing off, head nodding when a powerful blast of energy jolted me awake. I could feel brilliant, powerful waves of energy being unleashed from my sister- radiating, buzzing like tidal waves emanating from her being in all directions, blasting through me on their trajectory outward and beyond. Then I noticed her breath- to my trained eye I knew what that breath pattern meant- it was the end.

My Dark Night of the Soul

My sister and grandmother’s passing tore me apart, I didn’t know how to continue on. A few months prior to my sister’s passing I had quit my job to move to San Diego to be with her. While my husband and I made preparations for the move I made frequent long visits to be with her and my mother (who had moved to be with her and help care for her the year prior). My husband and I bought a house and had planned on spending many years living near my sister. The night she passed was the night the moving truck arrived with all our belongings.

The devastation and despair were crippling, and I had this beautiful baby that needed me. As much as I wanted to curl up and go with my sister, I knew the living needed me too. I had had many beautiful, mysterious, awe-evoking experiences with the non-physical world since my grandmother passed. Those experiences were as real and vivid as the ones I was having with this physical dimension. Now that my sister was in the non-physical world as well those experiences became even more frequent.

In hindsight, the moment I surrendered was the moment everything changed. Magical, unexplainable coincidences showed up in my life daily. Six months after my sister’s physical death I found myself self-employed weaving together mind-body-energy medicine in a vibrant business seeing clients privately and holding small classes. And over fifteen years later I have never looked back. I know in my marrow that I am living the life I was designed to live, making a positive impact in the world and leaving it a better place than if I had not surrendered to my inner truth.

Fearless To Be Me

Those experiences, as heart wrenching and difficult as they were, brought me to a fearless place where I knew I needed to fully embrace the beauty of my talents and gifts, regardless of how they are perceived by certain individuals or groups, because the world needs me. And through my personal (and professional) journey I know that the world needs you and your gifts and talents too. That is why we are all here- to express and create from that unique expression of the divine that each of us are. 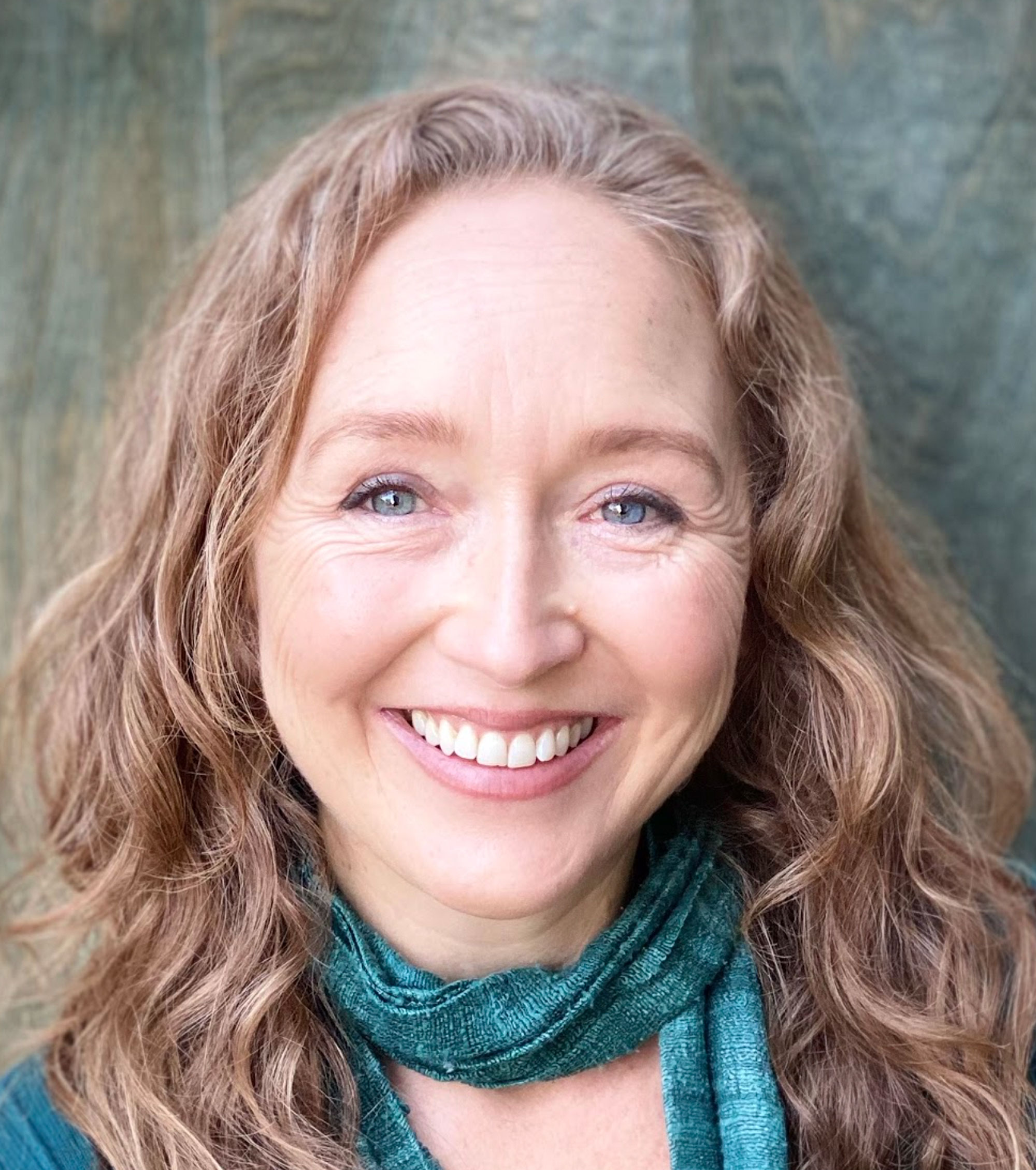 I hope that being vulnerable and sharing this piece of my life story has somehow inspired you to bravely follow your dreams and express the unique radiance of who you are!

Are you ready to awaken the portal within?